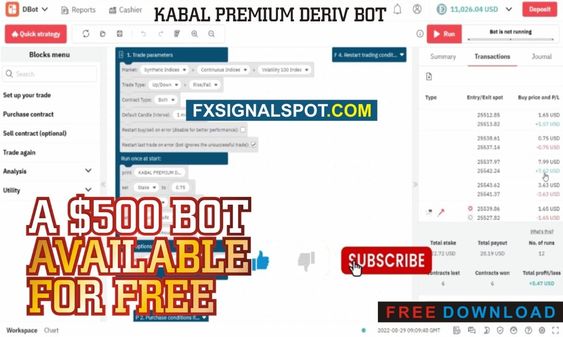 Binary trading is not the same as before; now, you do not need to manually trade one rise and fall strategy. Instead, you can use Dbot or robot for auto-trading and systems other than rise and fall. However, using the Deriv platform to perform various binary trading strategies would be best. They also provide forex trading and other index asset trading too.

You already know that this robot loses a trade and uses martingale steps. However, you will be profitable ultimately because of the safe martingale steps and digit strategy.

We have run this dbot to our real account more than six times and profit five out of six times. You can use this deriv bot to your real account if your account balance is $50 to $100. Then, your initial trade should be $0.35.

You know that the deriv platform allows trading digit over or under strategies and the dbot platform. So, all the XML formate robot only works on bot.deriv.com.

In each run, you should target 5% of your account balance of $5. After you achieve the profit target, you can run the robot after a while for another $5 profit. It would be best if you did not run this robot the whole time. Remember, when we lose money, deriv makes profits. So the less you run the robot, the better it is.

Before running any robot to the deriv platform, you must test it on your virtual account more than ten times. This is how you know the real potential of this deriv bot for a real account. You should also know that fear of money does not usually make profits. So, invest your spare cash so you will not be stressed out.